I hope you are well.  I wanted to a quick post in response to a challenge, one of the kids I work with, told me about in our last session: accurate interpretation of emotions based on facial expression.  I asked him what he thought was so difficult and he did not respond except to show me a picture of a birthday card, which said "Darth Vader's Emotions".  He then went on to explain that one of the biggest struggles he faces as a young man with autism is being able to understand others' emotions based on their facial expression.  Darth Vader, he said, is how he experiences attempts to understand visual signals, noting that to him the face looks largely the same and provides as much information as an unchanging mask.  The picture of Darth Vader was very simple and only contained a couple of emotions, along with no further information about what they meant.  To be fair, this was a greeting card, yet the client's connection was very clear.  Together we decided to create an expanded identification guide for emotions based on how he experienced them for sharing with his family and team of supporters.
When you are looking at the "Darth Vader Facial Emotions Recognition Chart", I would like to encourage you to take a moment and consider what it must be like to be taught about, and expected to use, appropriate and congruent facial affect; to be taught and expected to do without being able to rely on yourself to interpret the correct result.  Also, please pay attention to the fact that there are a greater number of emotions identified (ones picked by the client according to their importance to him) and there are no definitions of what they mean, no definitions of situations where they can be encountered, and no definitions of nuance.  How would you define these emotions to someone who does not connect to them like we do? 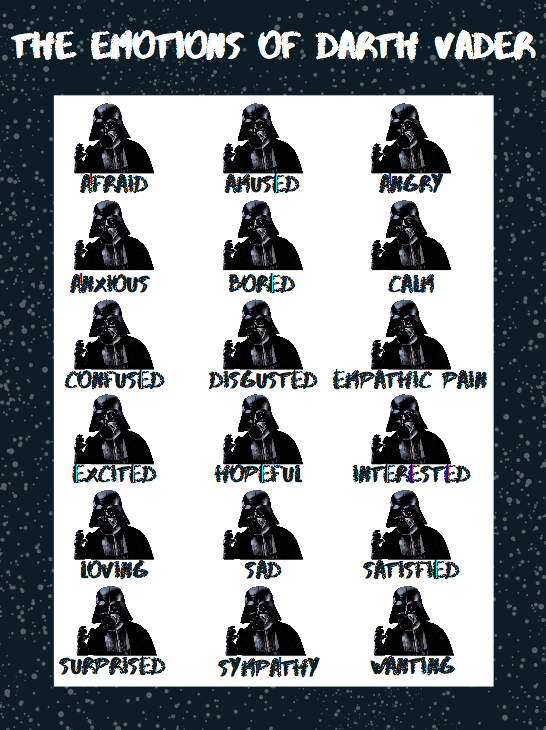