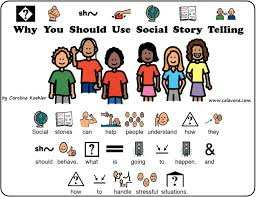 Social stories are an excellent tool to use with children with autism spectrum disorders and other developmental disabilities.  Similar to infographics, a social story uses a combination of written words with pictures or symbols to present a concept or idea in a way that allows a person to actually "see" the thought.  While infographics are most often used to present data in the form of numbers, social stories present "data", in the form of individual words or short phrases, about social situations and how to handle them appropriately and effectively.  They are extremely versatile and can be adapted to any number of scenarios and situations from getting ready for school to how to handle bullies to how to have a conversation with friends.
Children and teens on spectrum often have a very difficult time thinking abstractly about other people.  This is especially true when it comes to thinking about how their behaviors and ways of interacting with their world impact others.  Individuals with autism, due to how their brains are wired, often have difficulty processing more than small amounts of information being given to them; often they are initially able to respond to some, but not all, verbal cues, especially if they are talking about a subject of interest holding their attention (which plays into their limited capacity to attend to multiple tasks due to difficulty they are experiencing shifting focus from one thought, or piece of information, to another).  Verbal information does not take into account the non-verbal cues being sent through body language, particularly posture, facial expressions, and gestures.  Add inflection, tone, nuance, etc. and the amount of information being handed out quickly overwhelms the person with autism.  For example, a client of mine is very proficient at telling people he needs to end a verbal interaction because the other person raised their voice (this is a trigger for his own anger as he perceives them as being upset at him and becomes defensive).  However, he has experienced a number of situations where the other person raises their voice for a reason completely unrelated to anger but interprets the reaction incorrectly and uses his exit strategy.  The result is that the other person perceives him as being rude and then does become upset at his behavior, verbalizes it, and he reacts with anger. 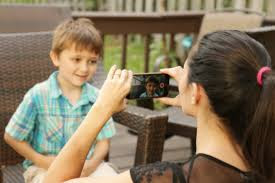 For my client, using a social story has been a quite effective tool for explaining why he repeatedly encounters this situation and experiences the same result.  By using pictures combined with words to present information, the social story takes advantage of the fact that many with autism have excellent rote memories and can store vast amounts of information as "facts" with excellent recall abilities.  The use of a picture provides an added enhancement to the information being learned terms of the association made between the image and the concept.  However, my client, like many others, and people in general, sometimes has difficulty recalling information presented in a social story, especially if it is a new concept or scenario.  That is where the versatility of smartphones comes into play.
Smartphones may be a mixed blessing by some, yet they are an excellent resource for children and teens with autism and their parents or caretakers working with them on social stories.  Using a smartphone to record social stories provides an added advantage to the user for an easy reason in that the recorded story can be stored on the phone and accessed as a quick reference point when the individual encounters a situation they are unsure of.  Recording social stories on a smartphone, in addition to ease of access, also allows for a greater quantity of information to be stored and transferred to other electronically to other devices such as tablets, computers, laptops, ipods (if they are still used) and so on.  This can be very useful for younger children who do not have a smartphone but have access during the school day to an electronic resource.
Besides convenience, using a smartphone to record social stories is an excellent way to introduce a dynamic and exciting aspect to learning the information presented.  Children in general love to get attention and often find the opportunity of being "on camera" an excellent means of getting it as well as a great deal of positive validation.  Having the child act out the social story with a family member, therapist, or puppets, provides an in-vivo training experience to test the practicality of the social story so it can be changed as needed.  Critically, the child is beginning to acquire the "facts" contained in the story which will be used toward future successes; the confidence gained is a wonderful boost to their willingness to attempt encountering and handling situations.  As an added positive, having the child be able to watch themselves acting out the social story provides a strong degree of relevance and usefulness to the child because they are seeing themselves at work handling the situation and are also beginning to see themselves as the expert.  That point is especially important to note as many children and teens with autism rely on perceived experts whom they can trust to give them information or "facts" to use in solving daily scenarios.  The child can, by seeing himself in the recorded social story, has a concrete example where he is teaching himself and having fun doing it!
Posted by Jonathan Rhoads, LCSW-C