I hope you are all well.  There has been a recent resurgence in focus on child sexual abuse and its impacts not only on the victims but on their family and support systems as a whole.  With recent documentaries, exposes, and interviews with alleged celebrity perpetrators, many parents are finding new fears not only around protecting their children from being the victims of such trauma but also around how to do damage control when they find out that their child has been a victim.  In response to numerous parent questions and concerns, this month's post will take a look at some tools that parents (or any loved ones) can use at the time abuse has been disclosed to provide some anchorage in the new storm of chaos. 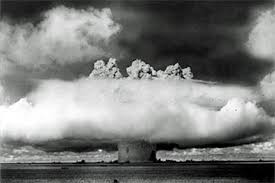 A child's disclosure of sexually abused trauma has the emotional and psychological impact of nuclear explosion on the whole family system.  Just like a nuclear explosion, the disclosure of the abuse represents the initial detonation of a trauma bomb on what we can say is the village of a previously an intact family.  The subsequent shockwaves following the detonation represent the devastation of farther ranging impacts on the family as a whole as well as its component individuals.  The effects of disclosure on individuals in the family are called fallout and, just like the aftermath of a nuclear explosion,  can linger for years and can continue to deliver poison that weakens recovery efforts or in some cases contribute to their complete failure.  A disclosure of sexual abuse does not come with the aid of an air raid siren or with other advanced warning in many circumstances.  While there are warning signs of sexual abuse , in many cases there is no knowledge that it is even occurring, which makes the power of the initial blast so much more devastating.  It is outside the scope of this post to go into detail about all of the different emotional and psychological aspects giving power to the trauma bomb, however it is critical to note that they are many, conflicting, and totally overwhelming.  When a child reveals abuse to the parent, that explosion is immediately absorbed by the parent, which sets off their own chain reaction of thoughts and emotional trauma.  This chain reaction continues as it spreads from family member to family member and throughout the extended support system, hence the shockwave effect.
Before we look into our suggestions for emergency response, I want to take a moment to make several points very clear.  Taking them to heart may be very difficult, but you, the parent or loved one, need to make the effort for yourself and your child.
First, you may have an overwhelming surge of guilt that you did not protect your child or that you had no idea they were being abused.  Experience that emotion but do not get caught in it because you will invariably collapse inward on yourself at the expense of being able to help your child.  Please remember that perpetrators of sexual abuse are very good at not getting caught and it often only gets revealed after the abuse has been going on for a long time.  Since you are not a super hero with powers of seeing what is not visible, you cannot be expected to know.
Second, it is unreasonable to expect that your child has been purposely withholding information from you about the abuse or that they are trying to gain some kind of attention by revealing abuse to you.  For us children who have been abused, whether we reveal early into the abuse, or many years later, it is completely dependent on how we have been scarred by the abuse.  For many of us, we have been threatened or coerced into silence.  For others, we have been groomed to believe that the abuse is alright and normal.  For others, there is fear that we will not be believed if we tell our loved ones, or that we might be responsible for destruction of the family.  Many of us, when encountered with the shocking fact that the abuse is either not ok or has been so damaging to our bio-psycho-social-spiritual-sexual self, withdraw into numbness or experience profound shame and try to bury the horror.  We do not reveal sexual abuse with the goal of hurting you.  If we could we would make it our responsibility to take on your trauma from hearing our revelation; we experience tremendous guilt as a result, which often contributes to why we won't tell you.
Third, you as the parent, may have expectations for how your child reacts to their own disclosure.  You may also have expectations for yourself for how you will react to the detonation.  Consider SUSPENDING YOUR DISBELIEF.  A child who has been abused is experiencing a huge range of thoughts and feelings all conflicting with each other and uncontainable when pushed too far.  You may not get an emotional reaction you are expecting.  for example, one child I worked with experienced disclosure of their trauma as a happy event because they felt a sense of freedom from the terror they had endured.  Another displayed no emotion at all.  as recipients of this information you may not know how to react either, yet however you do, know that it is real and valid, and must be held in some control when you are being told about the abuse.
Fourth, the shockwaves of the abuse will spread to other members of the family, especially if a member is the perpetrator.  Know that further damage control and crisis intervention will be needed.  Family alliances, structure, supports, strengths, functioning, and identity of the family as cohesive unit all get destroyed by the detonation of the sexual abuse trauma bomb.  Trust gets destroyed and relationships can be irreparably damaged.
However, you as parents, are resilient and that quality is critical to have not just at the time of disclosure but as you help everyone heal and rebuild the family village.  You will need this resilience and an ability to tap into your deepest strength as a caregiver to provide the necessary damage control and lay the groundwork for your child's recover, which will be discussed in the next post.